Recently, I attended The London Book Fair - one of the biggest, most celebrated events in the industry. Staged in the capital’s impressive Olympia Exhibition Centre, it was my second visit, my first being four years ago when I was still very new to the scene, desperately seeking an agent and trying my best not to let the sting of rejection get me down. Back then, I took my Dad along, my biggest fan and supporter, but also an avid reader and therefore interested to see what it was all about. 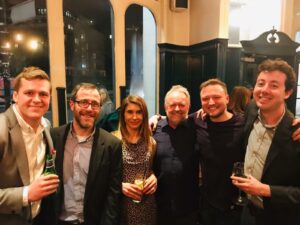 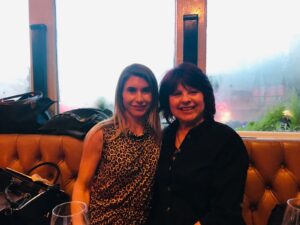 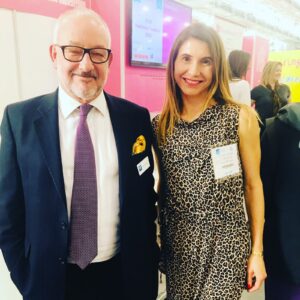 With David Roche, Chairman of The London Book Fair 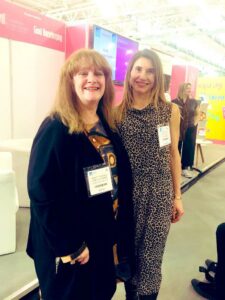 With my agent, Annette

Even then, despite my despondency, I remember feeling instantly buoyed by the electric atmosphere, the infectious energy of the place, that hit me as soon as I walked in. Granted, it goes without saying that each attendee – be it publishers, agents, published and unpublished authors alike – has his or her own personal goals and agendas over the three-day fair, but one aspect that unites them is their love of the written word and desire to entertain their audiences.

Primarily a global marketplace for rights negotiation and the sale and distribution of content across print, audio, TV, film and digital channels, the fair’s not just about industry professionals doing deals, but also features some fascinating talks and insights into latest business trends and innovations, as well as educating authors on how they can maximise their potential in what is, without question, a fiercely competitive industry.

And just as I remembered it to be four years ago, Olympia was buzzing with frenetic activity and animated chatter when I visited last Tuesday, thousands of professionals mingling at seemingly endless rows of stands with a view to kick-starting their business for the year, although this year I couldn’t help but walk in with a slight spring in my step knowing that after some serious hard work and dogged persistence, my books are finally going to be published, not to mention the fact that instead of going straight home that evening once I had seen everything I wanted to see, I was having drinks across the road with my publishers and fellow Endeavour authors, something I was very much looking forward it at the end of a busy day.

After a general wander round, I was lucky enough to listen in on some fascinating seminars at Author HQ - a theatre and networking forum with a particular focus on indie authors and aspiring writers - as well as attending the Book Brunch and Ingram Spark sponsored Selfie awards with my agent, Annette Crossland, who was on the judging panel for this worthy initiative.

The first seminar I listened to - ‘Building an Author Brand’ – gave me much food for thought. A key point made was the need for authors to recognise what they want their audience to think and feel when they see their name or pick up their novel. Hopefully a good writer, someone who they can rely to deliver a great read and consistently entertain – these thoughts, amongst others, ran through my head as I listened. Also, somebody who is likeable, interesting and approachable! Of course, you need to be able to identify who your audience is in order to do this, as well where their interests lie, e.g., by investigating what newspapers they read, what websites they go on. And by audience, we are not just talking about an author’s readers, but other groups too, namely, the author’s agent, publisher or potential agent, publisher.

The speaker emphasised how important it is for authors to build a direct relationship with their audience. It doesn’t really matter how they do this – it could be via their websites and/or various social media outlets – so long as the relationship is established, thereby enabling audiences to immediately identity what makes any given author unique. I found this particularly interesting as it wasn’t something I had previously given a lot of thought to. I suppose this is because much of the time, authors tend to think about the ‘genre’ they write in as being what sets them apart, rather than themselves as people. But the argument being made here was that it’s ‘you, the author’ and your own unique identity, that sets you apart, rather than your genre, or the imprint you happened to be published by. It’s a good point, although I couldn’t help thinking this might be easier for well-known authors who have built up a sold reputation in their genre over several years - John Grisham for example - and are therefore more easily identifiable than a debut author looking to establish themselves in their field. Even so, an example used was the author Joanna Harris. Although she is most famous for her award-winning novel Chocolat, her novels cover different genres,  meaning she isn’t solely identified as being a romance author but simply “Joanne Harris - the author” and therefore a classic example of a well-known and trusted brand, who explores all kinds of subject matters and genres but who readers can always rely on to consistently entertain.

Following on from this, the idea of authors being accessible to their readers and generous with their time was stressed, something I agree with wholeheartedly (after all, an author’s readers are their bread and butter and without them where would their books be?!) but which is perhaps sometimes easily overlooked as authors become more successful. In today’s increasingly competitive, saturated market, it’s perhaps no surprise that audiences want to know they are getting a quality product when they buy it, which is why the speaker placed great emphasis on the cover design of an author's book being an essential ingredient. After all, if the cover doesn’t catch a prospective reader’s eye, there’s far less chance of them opening the book up to see what’s inside; a great shame as it could be the most brilliantly written book in the world!

The seminar concluded with another crucial point in relation to successfully building a brand, which is about authors having the courage to positively sell their books to their readers. However good a publisher is at pitching a novel, there is nothing more authentic than hearing it from the author’s own lips. That made sense to me, and it’s not about bragging or being arrogant about your work; it’s simply a question of having some self-belief that after a lot of graft and endless editing, you’ve produced a quality book that deserves to be read, and which readers will enjoy. After all, if we, as authors, don’t believe in our books, how are our audiences going to believe in them?!

The second seminar I listened to was a more generic one on 'Publishing Trends in 2018'. The presenter went through a lot of data across a range of genres and countries, but two points I found particularly interesting (and heartening!) were firstly, that crime remained a consistent big hitter last year, with several crime authors bagging a top ten spot in the bestsellers’ list, and secondly, that psychological thrillers are still thriving with space in the market for new entrants. With my latest psychological thriller currently out on submission, I found this statistic particularly encouraging! Finally, it was also interesting to hear that female readers made up the largest audience for the crime/thriller category last year, demonstrating that crime isn’t a genre mainly read by men as some might think!

Before heading off for drinks with my publishers, I stayed on at Author HQ for its final event of the day - The Book Brunch and Ingram Spark sponsored selfie awards. My wonderful agent, Annette, was delighted to be on the judging panel for this fabulous initiative which gives self-published authors the chance to showcase their work, and it was lovely to be able watch with Annette as both the winner and runner up were announced. As someone who has struggled for several years, I could only imagine the immense sense of achievement and relief they must have felt in being acknowledged like this. Writers become so immersed in their work, it’s akin to developing a love affair with their plotlines and characters, and therefore it’s hard not to take things personally when an agent or publisher doesn’t feel the same way.

After that, we met my publishers at a bustling pub across the road from Olympia. After a long, albeit fascinating day, it was a welcome chance to relax and mingle over a drink or two, while the lively vibe of the place made me quite nostalgic for my London days! I’d had a great meeting with my publishers back in January and was really looking forward to meeting James and Rufus again, as well as my fellow Endeavour authors who I had yet to meet in person. It was a fantastic evening. Everyone was so friendly and positive, and it was great to be able to discuss plans and exchange ideas with such a lovely, talented group of authors who made me feel so welcome.

So those were the highlights of my 2019 book fair, very different to my first foray four years ago. Who knows what next year will bring…?!